Neil Cruickshanks won the "Club Level" award at the Sport Moray Awards ceremony on Wednesday 26th November at the Town Hall in Elgin.

Neil was delighted to be nominated by the Club and even more delighted to win (his reward was a Quaich and a bottle of the good stuff).

Great recognition for Neil's hard work over a number of years and also good PR for EBC at the same time.

50th ANNIVERSARY - A BIG THANK YOU

As the winter nights draw in we can reflect on a great year for the club. This was topped off by the 50th anniversary dinner which I can say was thoroughly enjoyed by all present - good food, good speeches and good company.

We would like to thank the following for their gifts to the Club either as auction items or raffle prizes. If I've missed out anyone please let me know at an.fotheringham@tiscali.co.uk

Many thanks once again from Elgin Boys Club

Well done to our own Phil Stuart who has been awarded 'Best Volunteer in Schools Football at the 2013 Scottish FA Grassroots Awards'.

Just to help you out Phil is sitting next to some bloke called Kenny Dalglish.

Have a look at the party in full swing here! More news later.

The presentations were as follows:

Thanks to all who attended on the night. Also to those who have contributed so much to this our 50th anniversary - both in footballing terms and in organising celebration events.

We hope you have enjoyed the season and look forward to seeing you again next year.

BEST WISHES - and for those of you lucky enough to be attending our Anniversary Dinner on Friday 20th September - see you there! (there may still be tickets left - phone Bob stewart to find out).

By the way the raffles from the finals game and presentation night raised £421 - thanks for all contributions and to Mike for organising.

The season came to its finale on Saturday 31 August when Waverley took on Corinthians at Elgin City's Ground. In front of a fair size crowd both teams put on a cracking show of football both in terms of skill and organisation. Waverley dominated the first quarter of the match so it was a shock when Corinthians slotted in the first goal. Waverley didn't panic and were level after a few minutes. This set the tone of the match right through till the last 10 minutes. With the score at 4 each Waverley pulled ahead. Then came the most controversial moment of the night. Waverley conceded a free kick just inside their own half. Corinthians keeper launched the ball deep into the opposition's goalmouth and scored - or so he thought. Despite having gone into the net the free kick was indirect and had not been touched by any other player before crossing the goal-line. A goal kick was given. The final minutes brought a further goal for Waverley putting the cup beyond Corinthians' grasp.

This game was a great advert for EBC football. Contrast this with the Scottish Premier League that same afternoon - a series of dull nil all draws with a spattering of single goal wins. This writer would have paid money to see this.

Thanks to both teams, Harry for refereeing and Sean and Neil for assisting. Thanks also to Graham Tatters for presenting the cup and to Elgin City for hosting the game. Also to Mike Christie for organising the raffle.

A good turn out of adult members would be appreciated.

Doors open 6pm. Boys/teams getting awards to report to their manager in the upstairs gallery of the Town Hall for 6.30pm. Presentations start at 7pm sharp and will finish with a press photo of all captains etc. around 8.15pm. So a short evening, but an important one for the boys and their parents. Finally - Dress code for the boys smart - no jeans please.

The Senior Summer Cup Final will be played on Saturday 31st August at Elgin City FC's ground at Boroughbriggs. KO 6.30pm. Corinthians take on Waverley in what should be a thrilling decider for the last honours of the season. Admission is free so bring along friends and family to enjoy the occasion. It also avoids having to suffer watching Saturday night telly!

Just a final note. We raised about £2,300 from the penalty competition, stalls and donations. A great result. Many thanks to those who helped organise and contributed to the event – it's much appreciated. Special thanks to Fionn O'Driscoll, Jack Lowes and James Stuart who win free membership for next season for raising the most sponsorship money from the penalty competition. (Remember the EBC 50th Anniversary 10 year old malt whisky is still available to buy from Gordon and McPhail).

As part of our celebrations to mark the anniversary of the foundation of the club the Elgin Boys' Club are hosting a formal dinner. As well as being attended by past presidents and 'old boys' from years gone by the dinner will be addressed by none other than Craig Brown arguably Scotland's finest football manager both at club and national level. Accompanying Craig will be comedian Jimmy Stirling – "Quite the finest after dinner speaker in the land" – (Chick Young).

Full details are on the application form which can be downloaded HERE. Print the form off, fill in and return to Bob Stewart by post as soon as possible. Tickets will be allocated on a first come first served basis.

So grab this chance to be part of what should be a great night – good food and wine, a dram and some excellent entertainment. Also catch up with your old team mates – it'll be like Friends Re-united except more interesting! 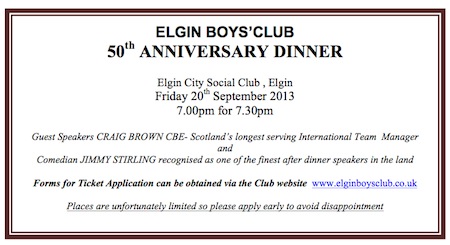 Congratulations to all our winners from Friday's cup final games.

Intermediate Summer Cup: Cameronians ran out winners over Saracens in thrilling match. They were 3 up at half time but held on to win 3-2 after a solid come-back by Saracens. 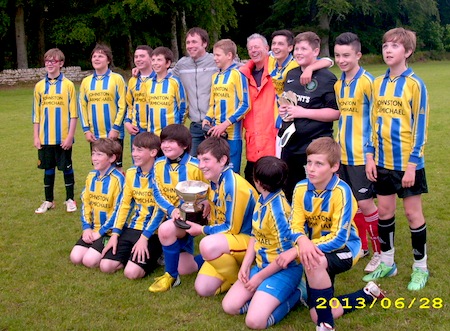 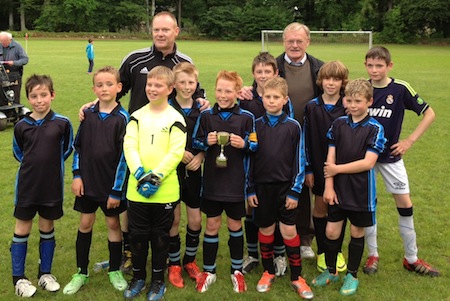 Junior Summer Cup (Supplementary): Another cracking match. Crusaders looked to have it all sewn up by half time but Saints came back strongly after the break. Crusaders 5 St Columbas 4. 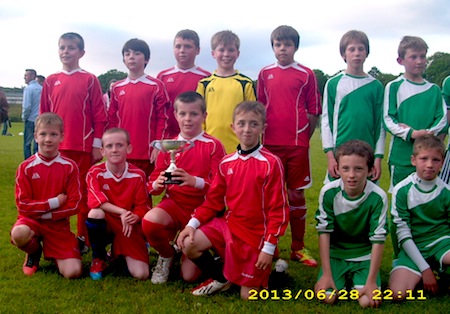 Thanks to all for a great season. Still to come - Seniors Summer Cup Final.

An announcement regarding this will be posted later this week.

A few changes are necessary for the completion of our season. Managers and players please take note here.

Just a short note to thank all concerned for their contributions both in donating and the preparation for the day. More on this later. Also reminding all managers that the sponsorship money should be collected by next Friday 21st and handed to Mike Christie.

No excuses - I got the dates wrong! A new fixture list will be posted as soon as possible.

Hi guys, a heads up on the Sunday Funday on the 9th June.

An important point to mention to all your boys for parents. For the safety of the youngsters there will be no parking within Morriston and parking will have to be elsewhere. Bishopmill School may be a suitable option with a short walk down to Morriston.

As you will know from Mike the day will consist of a penalty competition among individual teams with the winner going forward to represent your team at your own age group to see who the "penalty king" for each section. Each manager or nominated adult will arrange their own team's competition. please assemble on pitch No.1 when the arrangements will be made clear to all. Can you please collect all your teams money and hand to Mike (or committee members at the pavilion) as quickly as you possibly can.

There will be some stalls, burgers, ice cream etc.

For the bottle stall any donations will be gratefully received in the referees room any night. (Any kind of bottle, juice, sauce, washing up liquid, wine - if it comes in a bottle that will do!)

The "oldies game" will start about 1pm with ex Rangers and Scotland goalkeeper taking on ex Caley Thistle Stalward Ian McArthur - think you will find some surprising guys on show!!

Captains Walker and McArthur are pleased to announce their teams:

Remember the penalty shootout in the morning as well. Food and drinks available on site. All welcome.

The Club is looking for donations for the Funday prizes. All contributions will be gratefully accepted. Boxes of chocolate, sweets, footballs, even the odd bottle of wine or whisky (for the adults of course) - all welcome. Please hand in to any of the coaches or committee members on Mondays, Wednesdays and Fridays.

A message from the Secretary to all managers and players ...

Hi guys now that the season is underway we can turn our attention to celebrating our 50th season.

On Sunday morning we are having a Funday for all the boys and a sponsored penalty shoot-out (again at Morriston) in teams - with prizes . Details forms etc. to follow.

On Pitch Number one - after the penalties - there will be a challenge match featuring many of the Boys Club stars of yesteryear when a team managed by former Rangers goalkeper Nicki Walker is challenging a team manged by former Inverness Caley Thistle stalward Ian McArthur. I know already that the these guys phones are red hot and there is fierce competition for places and no doubt money will be changing hands.!!. Should be a great day out - particularly for the former members of the club from the last 50 seasons but for anyone who can make it down.

There will be plenty press coverage in the weeks to come and we would like participation from all the club teams. If you are unable to be present on the Sunday, please try and get someone to look after the boys and ensure they can take part.

A special commemorative medal has been struck for all adult members and boys taking part in our 50th year and they will be presented before the end of the season .

Finally, the Club is to hold a Commemorative Dinner on Friday 20th September 2013 in the Elgin City Club. Guest Speaker will be former Scotland Manager Craig Brown with supporting comedian. A date for your diary. ore details before tickets are made available to the public.

Hopefully this gives you a "heads up" on the next few months.