The Presentations Night at Elgin Town Hall on Monday 14th September was well attended with players and staff from Elgin City on hand to help with the handing out of medals and cups. MC Neil Cruickshanks introduced the top table and President Tiger Porter gave a speech thanking all concerned for making this season so memorable. Mike Christie was presented with a bottle of whisky to mark his fiftieth year of service to the club.

Many thanks to Neil C for his work in organising the night and Mike for doing the raffle both on the night and at the senior cup final at Boroughbriggs. Between them £482 was raised for club funds.

Don't forget that the club whisky (Speyside 10 year old malt) is still available from Gordon & McPhail priced £24. Christmas is just round the corner ....

Hope to see you next spring

Presentations Night will be in Elgin Town Hall on Monday 14th September at 7pm. Those receiving awards should be there at 6.30pm. All welcome.

Junior managers are reminded that all their squad will receive a medal for participating in the competitions in the Junior Section this year.

Congratulations to Saracens who make it a clean sweep of the medals this year by beating Waverley 3 - 2 in the final at Boroughbriggs on Saturday 29th August. 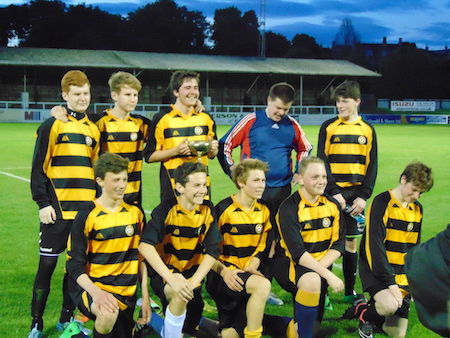 The Senior Cup final will be on Saturday 29th August at Borough Briggs. Kick-off 7.00pm: Admission - Free (Mike Christie will probably ask you to buy a raffle ticket though).

Presentations Night will be in Elgin Town Hall on Monday 14th September at 7pm. More on this later.

Well that's it for another season. Hope you all enjoyed the highs and lows.

Seniors - Despite having equal points in the League, Saracens win as they beat Corinthians in the head-to-head. This gives Saracens the double (winning the League Cup) and a chance of the treble if they beat Crusaders in the final of the Summer Cup after the summer holidays.

Intermediates - St Columbas made it a double victory by winning the League as well as the League Cup but couldn't make it three in a row thanks to a solid preformance by Saracens who went on to win the Summer Cup playing against Cameronians in the final. 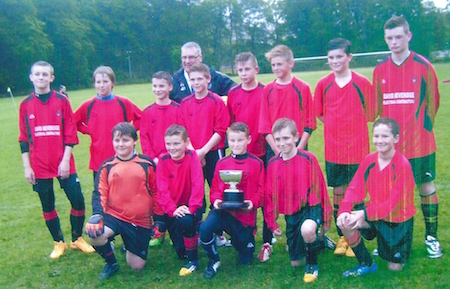 Juniors - Although no medals are given out at junior level it looks as if the youngsters needed no incentive to rattle in the goals - just look at the results in the three 'competitions'.

Thanks to all the coaches, referees, parents and supporters and ground staff (Mike, Robbie and Phil) who make all this possible. And of course to the boys who put so much effort in to the season.

Hope to see you all next year. For you older lads who have just finished at senior level - we're always on the lookout for new coaches!

Juniors - Please note that the Saturday 20th June fixtures between Corinthians and Saracens, and Royals and Cameronians will now be played on the following Monday (22nd).

Following games will shift on accordingly. There will be no games for Juniors on Friday 26th June due to competing outside interests (schools football, proms nights etc). The final games will now be on Wednesday 1st July.

Note that there are four games on the last night with all teams playing. This will mean a 6.30pm start rather than the usual 7pm. See your manager for details.

Seniors - The second semi-final will be on Wednesday 1st July. The date of the final is yet to be fixed.

Seniors: Saracens triumphed over St Columbas in the first final of the season eventually winning by 3 goals to 1 in a hard fought contest. 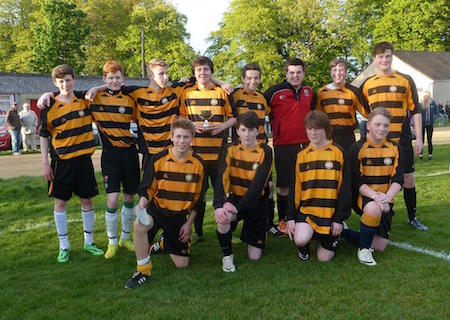 First half was an end to end game of football with lots of entertainment.

Both sides having plenty of chances, but the keepers at both ends doing well. First half finishes at 0 v 0

Second half underway and the end to end match is kept to a high level.

However this lead was short lived as Waverley came back with an equaliser on the 47th minute.

First half was end to end yet again, things were getting tense and exciting.

79th minute Connor Smith scores for St Columbas and the whistle blows to end the first half of extra time.

Second half, St Columbas on the defence of the lead go to a 5-4-1, and the next 10 minutes are very tense with last minute free kicks and corners for Waverley with just minutes to go. 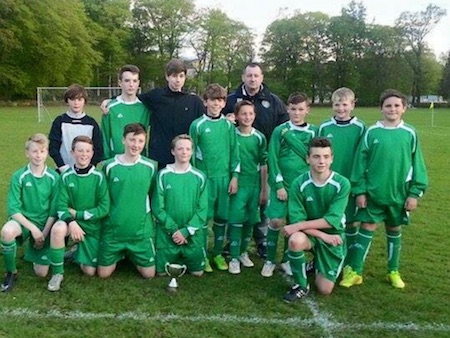