Award Winners are:- (Managers in brackets)

All Junior teams
all players will get an achievement medal

Intermediate Player of the Year
to be decided

All boys to be seated in order of presentation by their manager by 6.45pm at the latest. Awards will be presented in the above order. Full instructions will be given on Monday evening. Dress - dark trousers (no jeans); no trainers unless dark, shirt (tie optional.

Looking forward to a good turn out.

Elgin Boys Club are proud to present the final of the Senior Summer Cup between Waverley and Royals.

Doors open 6.30pm. Raffles, teas, coffees and a great game of football. Come along and support the lads and the club.

First of all congratulations to Waverley who won the Senior League Cup and to Saracens who won the Intermediate League Cup. If anyone has photos of the Senior presentation (Friday evening) please pass a copy to me for the website. The Intermediate presentation will be on Monday evening after the last game in the league. Unfortunately I can't mention that Waveley Juniors won the League as there is no cup for the 'non-competitive' set up under SYFA rules.

Upcoming events - This week end (Sunday 12th June) - an outing for Seniors and Intermediate select teams to Inverness. Next Sunday (19th June) - Huntly Tournament for a Junior select. Thanks to all managers involved in this. Again I'd appreciate some feedback (photos and a brief summary of how it went).

Mike C goes in for a knee operation this weekend and I'm sure we'd all wish him well and a speedy recovery. His duties will be covered by Neil C (referees), Bob Stewart (recording scores) and Phil Stuart (lower storage container - goal storage).

Juniors - Mid Summer Mix-Up - the fixtures on the website are wrong. These were put in as provisional at the start of the season. Correct dates are now on the website. Note that there are 4 games on the last Friday (24th) First set starting at 6.00pm; Second at 7.15pm. Chaos - well named a mix-up!

Lastly It's been pointed out that cars have been parking across the cycleway at the entrance to Morriston. I noticed a black Merc and a red Audi myself yesterday evening. Perhaps managers could mention it to their lads and spread the word. I'd hate to see an expensive car damaged by an irate cyclist.

Enjoy the rest of the season.


This must go down as one of the more memorable finals. Despite being keenly fought by both sides Crusaders went in at half time 4-0 up and looked to be cruising. Corinthians came out for the second half a much sharper team and proceeded to dominate the early stages.

Suddenly it was 4 all and we had a game on our hands. Crusaders broke the deadlock with two killer goals in the final period just when we thought extra time was on the cards.

Thanks to all concerned including Clyde the referee. Final score Crusaders 6 Corinthians 4 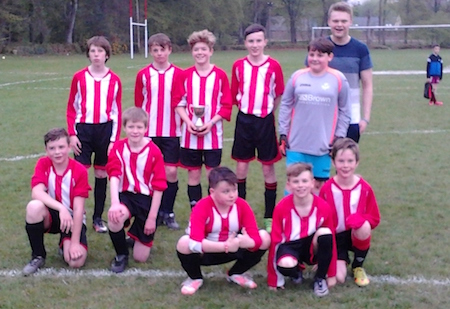 
Congratulation go to Royals (coached by Mark Angus) who beat Saracens 6-3 in the final on Friday 13th (unlucky for some).


The full fixtures lists can now be viewed here.


The registrations are in, the teams allocated and the fixtures set.

To find out what team players are in have a look at the Facebook link at the top of this page and scroll through until you find your name.

The team manager will be in touch in due course (have patience) to let you know what happens next.

The fixtures will be posted as soon as possible - watch this site.


Registration of players will take place at BOROUGH BRIGGS STADIUM, ELGIN as follows:

10.00am:
Players previously in membership of the Club using the WHITE FORM.

10.45am:
Players joining the Club for the first time using the BLUE FORM.

A joining fee of £20 is payable on registration.


The Club notes with sadness the passing of Jim George - Honorary President and a founder member of the Club.

The funeral will be Jim's funeral will take place at Watsons Undertakers in Blackfriars Road on Thursday (18th February) @ 10.15.

For your information Jim would have been 89 on Monday (8th). He had a longstanding committment to the EBC and will be missed by all.


Sun 13th March:
Registration of all players (forms yet to be distributed - watch this site)