Many thanks to all who attended last Tuesday’s presentation. There was a good crowd there to hear some kind words from Tiger and Steve Ferguson manager of Ross County and, of course, to see the lads receiving their medals and trophies. Any boy who has not received his medal should contact his coach.

The raffle raised £330. Thanks to all who gifted prizes.

Lastly thanks to all who contributed to this season – the coaches, referees, ground staff, the boys themselves and those that came down to Morriston in all weathers to cheers us on. And, as ever, if you enjoyed it come back and see us next year. For those boys whose last year it was – best wishes for the future.

Best wishes from the EBC Committee.

All boys who are receiving medals please be at the Town Hall at 6.30pm at the latest. Dress is smart – shirt and trousers (no jeans or trainers). Ushers will be on hand to direct you and give instructions. Coaches should arrive slightly before 6.30pm.

There will as ever be a raffle at the door so if anyone kind enough to donate a prize either bring it along on the night or hand it in to Mike Christie or any committee member beforehand. Thankyou.

This year’s winners are as follows:

JUNIORS: All junior players will receive a participation medal to mark their contribution and efforts in the 2019 season.
Most sporting team is St Columbas.
Junior player of the year: Joe Edwards (Saracens)

Congratulations go to Royals Inters on winning the Rosemary Rosebowl last Wednesday. Royals overcame Crusaders (League Champions) 4-2 in a thrilling match. Jak/Steve if you have any photos please send them to this website.

Following on from that final was the Senior match. Corinthians looked to have it sewn up with two goals early in the second half. Royals countered with two late goals (one in the dying seconds). With the light fading fast there was no time to play extra time so it was straight to penalties – Royals coming out on top to win the Jim George Trophy. This gives Jack O’Neil the treble in his first year as a manager at EBC. Well done. 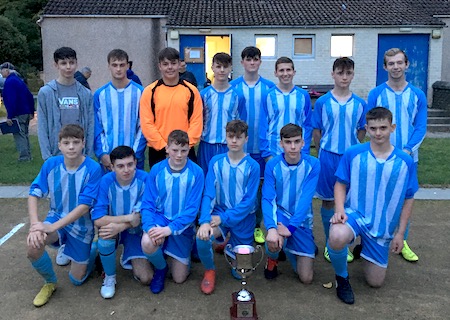 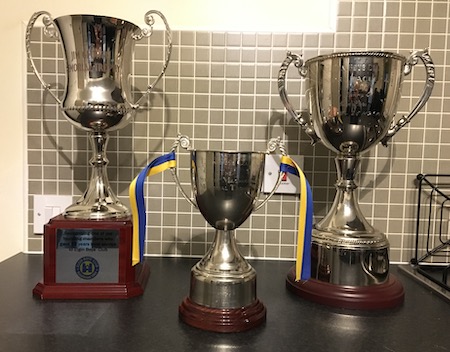 Thanks to all who contributed to Wednesday’s finals night – players, managers, match officials, presenters of trophies. Hope you all enjoyed it whatever the outcome. Special thanks to Mike Christie who prepared the pitch so well. Presentation night will be on Tuesday 24th September at Elgin Town Hall starting at 7pm. Instruction will be forthcoming.

The finals for this year’s Summer Cups will be held at Morriston Playing Fields on Wednesday 21st August.

All subject to extra time and penalties.

Both games will be played on the Pitch No 1 (nearest the pavilion).

There will be no Junior game.

Sadly circumstances dictated against us using Elgin City’s ground at Boroughbriggs this year.

In close contention were Corinthians and Royals.
(Still waiting for a photo Dave).

Also congratulations to Royals Seniors who picked up their second trophy of the season but not before the drama of an abandoned match and a replay. Royals’ game against Saracens had to be abandoned after Aiden Mackay was stretchered off after a serious injury in the final minutes of the game. It was replayed and Royals confirmed their superiority over Saracens thereby securing the Championship. Manager Jack O’Neil took the cup to Doctor Gray’s Hospital that evening where a delighted Aiden posed for the cameras. All at EBC wish the lad a speedy recovery. 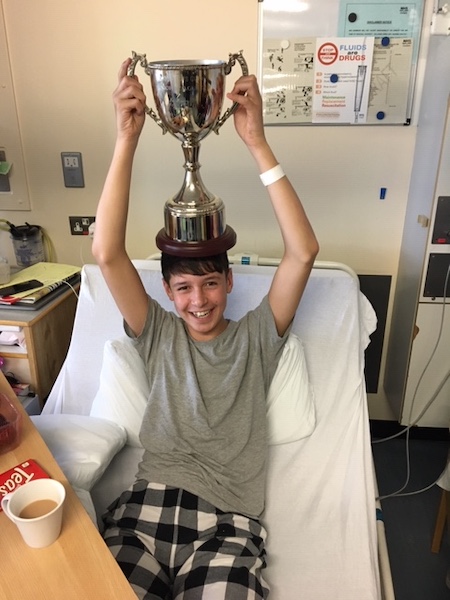 The Club is delighted to announce that the finals of the Summer Cups (Senior and Intermediates) will be held at Boroughbriggs on Sunday 18th August. There will also be an exhibition game between the top two junior teams.

EBC would like to thank Elgin City FC for hosting this event. This will be the Club’s third SuperSunday at this venue and it is proving to be a popular event in our calendar.

Our thanks go to the following companies who have sponsored strips this year:

It’s great to see our players well turned out on match nights.

Corinthians took the first of the honours in an exciting final against Royals in the Intermediate League Cup on Wednesday 15th.

Corinthians got two early goals and went in at half time ahead with Royals pulling one back. It took a late goal from Royals to even things up forcing extra time. A penalty decider was looming when Corinthians broke the deadlock in the second period to win the cup. Presenting the cup Hon President Bob Stewart thanked both teams for a great performance and referee Gordon Ellis for his efforts. 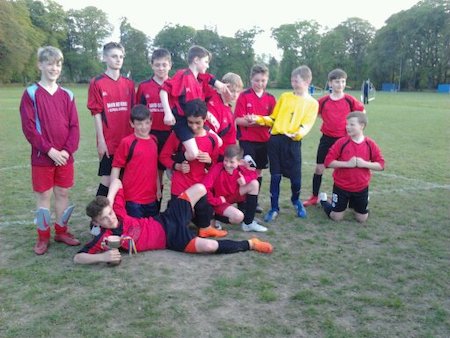 Meanwhile at Senior level Friday saw the final between Royals and Crusaders.

Royals got two early goals and seemed in command for a lot of the match. Crusaders got a second half goal back but were finally overcome 3 – 1. Good stuff from both teams as Hon President Neil Cruickshanks observed when presenting the Stuart McPhail Memorial Cup to captain Rian Wilson. Congratulations also to Royals manager Jack O’Neil in his first season with the Club. 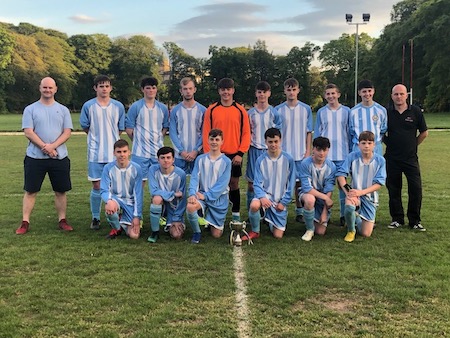 The fixtures are now available on this website. The format for Seniors and Inters is as last year (with a bit of tweaking) but the Juniors now has two extra teams. With these extra teams we need an early start and a late start. The exact timing of this has yet to be agreed with Junior coaches. For the moment a nominal 6pm or 7pm KO has been entered.

New / replacement strips have been ordered and the first batch delivered today (4/4/2019). Once we’ve sorted them out they’ll be distributed – have patience.

An email has gone to every applicant letting them know which team they are in. We have a reserve list of 12 Seniors but no Juniors or Inters. Waverley Juniors is short of a goalkeeper and St Giles Inter and Saracens Inter short of a player each so if anyone knows of a lad who fits the bill let a Committee member know.

Good luck to all players and coaches for the new season. Enjoy.

Applications to join the Club this year have exceeded all expectations. So much so that we have had to include an extra two Junior teams (St Andrews and Spartans). The good news is that all applicants at Junior and Intermediate level have been taken in and all teams are running at full capacity. At Senior level again demand exceeded supply and despite operating 15 player squads (some at 16) we have had to run a reserve list of 11 boys who didn’t get places. I’ll be in touch with these guys next week.

By now coaches should have been in touch with the boys. Fixtures will be on this website soon.

The Club welcomes new coaches - Jack O’Neill, Alan Murray, Donald McKenzie, Mike Imlach, Phil Buckle, Steve McKenzie, Dave Wilson and Steven Rattray. A big thanks to all the returning coaches as well. We now have a coaching staff of 38 volunteers however vacancies exist for coaches for Corinthians Seniors and Cameronians Intermediate so if you fancy yourself as the new Alex McLeish (or maybe not after the Kazakhstan episode) give me a phone.

Applications for this season 2019 are now closed. Allocations of boys into team will be made on Monday 18th March. Thereafter the coaches will be in touch with the players regarding team allocation, training, fixtures etc..

All coaches – Allocations Night as above at Boroughbriggs at 7.00pm. A good turn-out is essential. (This is for coaches only).

The trial that was set for this weekend has been cancelled. This is due to too many conflicting events that affect the boys who would have attended. We’ll find a way of evaluating new junior players on Monday (Allocations) night. Sorry for any inconvenience.

The closing date for all applications is Wednesday 13th March at 7pm. The Junior and Senior sections are full but boys who have played for EBC before (White Forms) can still apply. We are however still short in the Intermediate section (those born between 1/6/2005 and 1/8/2007).

Allocation of the boys into teams will take place on Monday 18th March. Thereafter the team coaches will be in contact with the boys. Be patient.

Trials for new applicants to the Club will be held next Saturday 16th March (afternoon time to be confirmed) at Elgin High School. This is for New (Blue Form) Juniors Only (born between 1/8/2007 and 31/12/2009). New Intermediates and Seniors need not attend. We have 71 new Junior applicants so it should be a busy afternoon. Watch this site for more information.

The registration process for playing this season is much the same as last year with the exception that payment may now be made on-line. For the first time in many years we have raised the cost for the season - now £25.

Follow the instructions in the link opposite remembering that White forms are for boys that are returning to the Club from last year and Blue forms are for first timers. READ THE INSTRUCTIONS CAREFULLY.

The Parental Consent form is incorporated into the process. All details that you give us is placed on our encrypted database and will be held only for the administration of the Club. It is also bound by the General Data Protection Regulation. All the information you require and conditions for joining the Club are contained in the application form.

For cash or cheque payments only we will still be holding a Registration Sunday at Elgin City Football Club (see below). It will also be a chance for those who have questions to meet Club officials face to face.

Places for the new season tend to be filled quickly so don’t leave it till the last minute – first come first served.

For those joining for the first time there is some information about the Club on our Homepage as well as rules and regulations.

Any questions email me on an.fotheringham@tiscali.co.uk

IMPORTANT DATES FOR YOUR DIARY

Registration: Sun 10th March - 10am and 10.45am – Boroughbriggs (Only for those paying by cash or cheque, wish to complete an application form by hand or have queries).

Allocations Night: Mon 18th March at 7pm – Boroughbriggs – Applicants will be informed shortly thereafter which teams they are in and any pre-season training arrangements. Fixtures will be posted on this website.